“Christopher A. Reynolds Collection of Women’s Song, 1850-1950” is an exhibit prepared by Professor of Music Christopher Reynolds. Located in the Special Collections exhibit cases on the first floor of Shields Library, the exhibit provides an overview of the Christopher A. Reynolds Collection which currently contains approximately 700 songs by women. Professor Reynolds has done extensive research on women composers, both from a cultural and musical perspective. He has been building the collection for close to twenty years and is in the process of donating the collection to Special Collections.

The exhibit highlights women composers of classical music, 19th century songs, songs about war, as well as women composers in California. Sheet music, gathered scores, correspondence, and biographical information on women composers are featured. Topics include those of interest to women — love, motherhood, the beauty of nature, and patriotism. The importance of eye-catching graphics to encourage music sales is evident in the covers of the sheet music.

The Reynolds collection includes songs written by women living in the United States, England, Canada, and Australia. One aspect that was virtually unique to the U.S. was the ability of American women to publish their own songs. Related to this collection and exhibit is a database of Women Song Composers, 1890-1930, created by Professor Reynolds that currently lists more than 12,000 songs by more than 1,200 women song writers.

The database documents the zenith of song writing by women in the early twentieth century. In the late nineteenth and early twentieth centuries, compositions by women expanded, but the decade after World War I saw a steep decline in songs by women. This decline likely stemmed from the replacement of the piano by the phonograph and the radio as the source of family music making, and also to the advent of “talkies.” 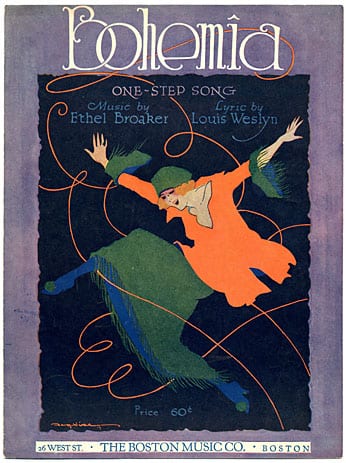